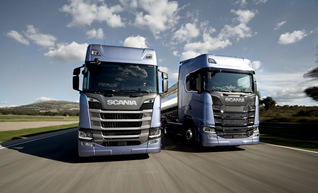 New R (above left) and S (right) models were unveiled in Paris recently, after 10 years of development work and its claimed the S truck will be up to 5% more efficient than the manufacturer’s most recently launched product, the Streamline in 2013.

The trucks have been designed to provide enhanced aerodynamic performance, and following years of testing Scania believes they will be the most aerodynamic trucks on the market.

There are new engines, with greater efficiency, and a redesigned cab, providing more space for the driver.

A range of new drag-reduction features appear in the S-series, now the largest truck in the range, with three adjustable air deflectors to improve the alignment between the cab and the trailer roof, as well as new smaller gaps between the lights and other external components. 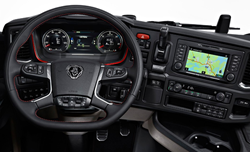 The windscreen has been mounted flush to the cab and there are integrated auxiliary lights and end-marker lamps placed above the windscreen.The rear-view mirrors have also been redesigned to optimise airflow and create less drag.

The full engine line-up will see power outputs from 410hp to 730hp, with the redeveloped powertrains getting new fuel injectors, revised combustion chambers and a reconfigured cooling system, all of which have been tested over more than 10 million km during the development process.

The additional space means the interior has been totally upgraded , with more room for the driver thanks to a new seating position, as well as more storage and greater visibility.