The future face of tippers?

Mercedes-Benz confirmed that its Econic municipal chassis is soon to be offered with the 8-speed PowerShift automated gearbox as an alternative to the current 6-speed Allison automatic box.

. Although primarily intended as a refuse collection vehicle, the Econic is now viewed  as having potential in several other urban roles, including distribution, tipper and mixer duties and as a skiploader!

Its low driving position and large glazed areas meet the demand for much improved cyclist and pedestrian safety in cities. 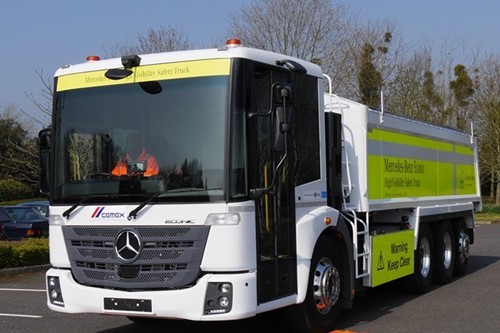 This truck is based on the 3235L Econic, with its OM 936 engine rated at a nominal 350hp/1,400Nm. It has a Wilcox body and Edbro CX14 front end tipping gear. I’m not quite convinced that this cross between bus & truck will be seen cruising around the roads of Armagh anytime soon…