The first autonomous heavy-duty truck gets its license to drive in Las Vegas .

Earlier this month, Freightliner (which is owned by Daimler) unveiled the first road-legal self-driving lorry in the U.S. 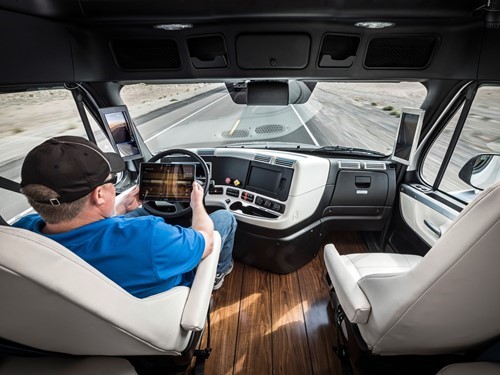 It is claimed that this autonomous technology, can help curb long-haul fatigue of long distance drivers by allowing a computer to handle the long, dull stretches of straight highway miles.

The system, called Highway Pilot, operates like the autopilot on a commercial airliner. Once set and underway the system can maintain a cruise without the driver's intervention. Highway Pilot uses stereoscopic cameras located at the front end of the truck that watch the road ahead for roadside signage, lane markers and other vehicles.

This 3D imagery is fed into the Inspiration Truck's electronic brain, which then affects the electric steering rack, the drive-by-wire throttle and the automated manual transmission to keep the truck between the lines and a safe distance behind a leading vehicle.

Freightliner claims that the system will notify the driver with visual and audible cues in the event that conditions won't allow confident autonomy (such as snow, rain or on roads with poorly defined lane markers) and a human is needed to take over. When driving conditions are optimal, however, and the road stretches out ahead, the Inspiration Truck's driver can set the Highway Pilot and tend to other parts of the business of logistics.

There was no mention of pricing or commercial availability—so it might be a day or two yet before we see such a truck as a common feature on Irish roads!